FX-guidance Blog Market With whom does Russia trade and which countries depend on us?
Market

With whom does Russia trade and which countries depend on us?

US and EU sanctions are designed to cut the economic ground from under the feet of the Russian economy. But in the global world, everything is interconnected, so it is not easy to “amputate” the Russian Federation from the international economy. Who is really threatened by the fall in trade with Russia? Let’s study the statistics: ours and the “enemy’s”.

The international company Statista estimated the volume of trade in a number of states tied to Russia. Not only exports were taken into account, but also imports, as well as its ratio to the share of GDP. The data for 2020, of course, is not the most informative due to the pandemic, but it allows us to identify trends. 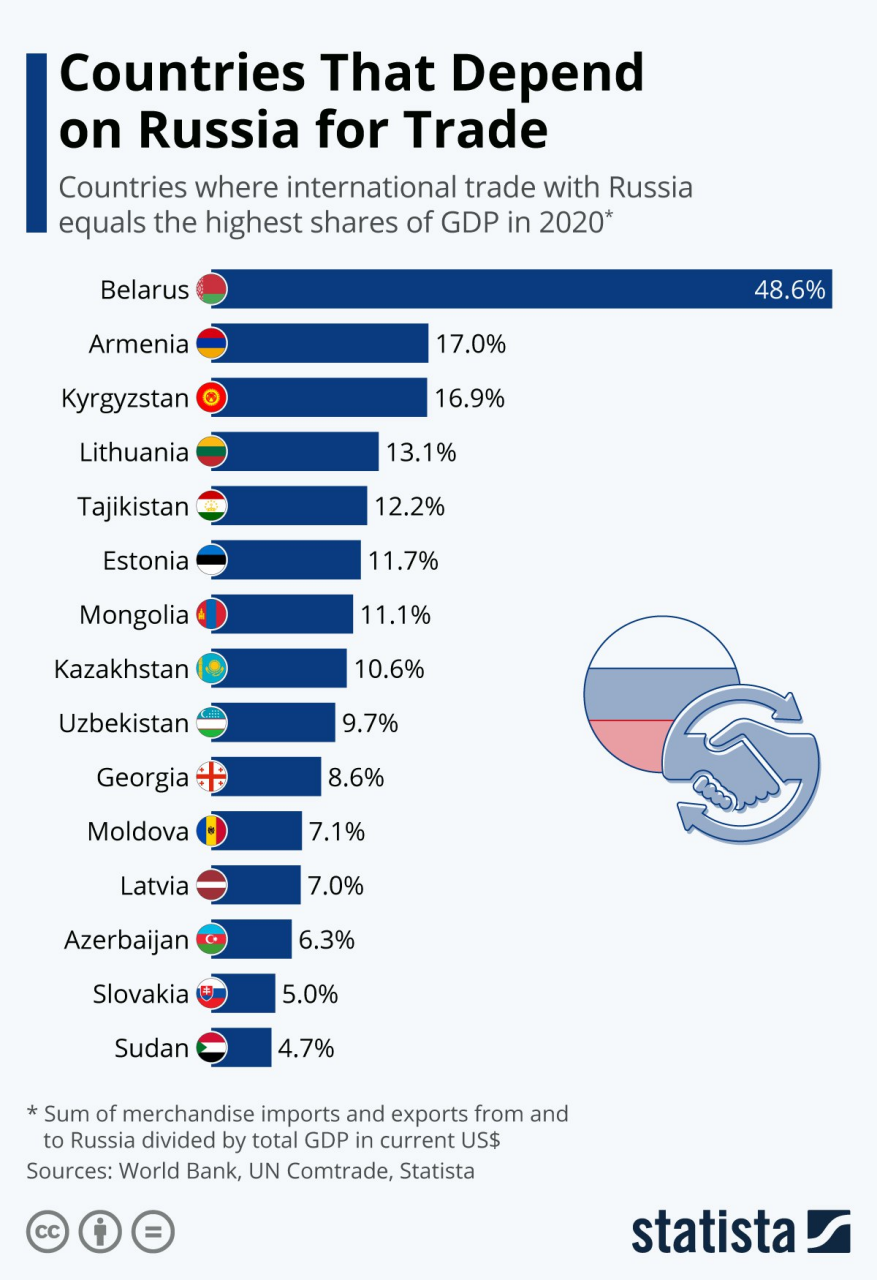 Almost half of all trade in neighboring Belarus built in Russia. This can explain why the large-scale sanctions imposed on the Republic of Belarus in 2020 did not work, but the economy survived. Just as dependent on import-export with Russia Armenia and Kyrgyzstan – about 17% of GDP comes from trade with the Russian Federation.

An unexpectedly large volume of foreign economic activity – with Lithuania (13.1%), Estonia (11.7%), Latvia (7%). As you can see, in 2020 Ukraine did not make any agenda in Russian international trade. The most promising economies in the world – China and Indiaas it turns out, do not depend on trade with the Russian Federation, the share of Russia is less than 5% in the structure of GDP.

And on whom does Russia depend?

The first question is where the Russian reserves are located. Statista came to the rescue again with bright infographics. It is based on data from the Central Bank of Russia as of June 30, 2021. A significant part of the resources is concentrated directly in the Russian Federation, and this gold – 21.7%. The largest investments are in Chinese yuanwhich form 13.8%. 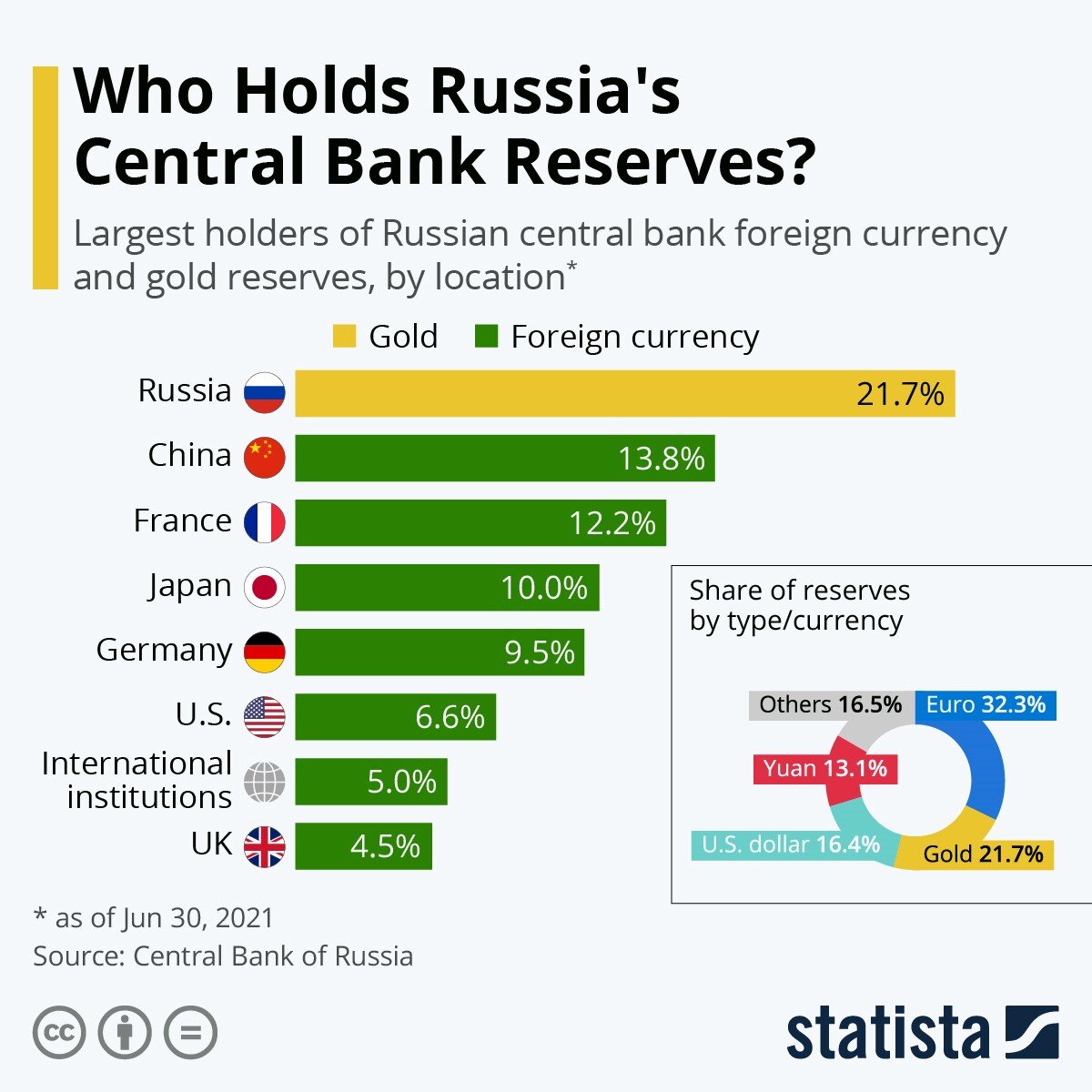 Well, then – entirely “hostile states.” Almost half of all Russian reserves are owned by France, Germany, UK, USA and Japan. And this is after a partial rejection of the dollar: in this case, Washington would have not 6.6% of assets, but 16.6%. It is not yet possible to dispose of these gigantic funds – they have been frozen.

In general, out of the $643 billion available as of February 1, 2022, only $132 billion is completely safe., that is, the fifth part. The rest is either foreign-issued securities (311 billion), or cash and deposits abroad (152 billion), or special drawing rights (30 billion). 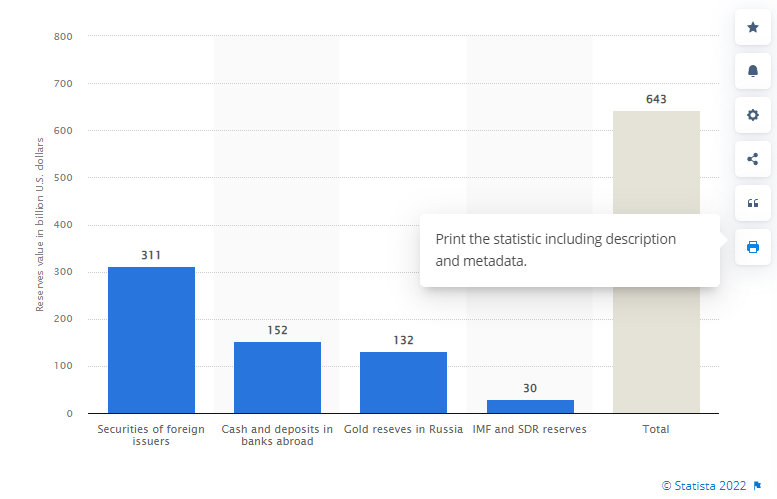 The second important point in assessing dependency is trade. If everything goes well, the reserves can be returned. In 2021, Russia had an excellent trade balance – plus $189.83 billion. 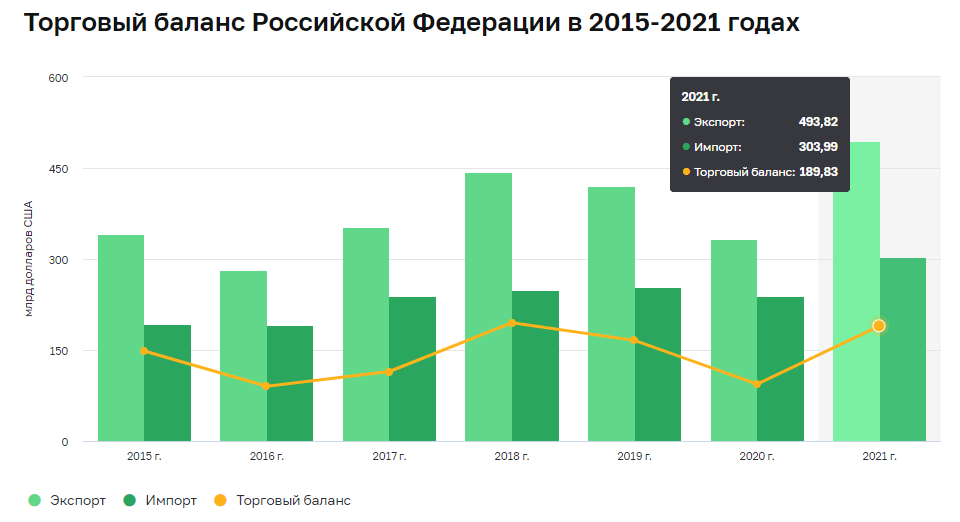 The consumer of 14% of domestic exports was China8.6% – Netherlands6% – Germany5.4% – Turkey. The top five key partners included Belaruswhere a total of 4.7% of all Russian goods were delivered. 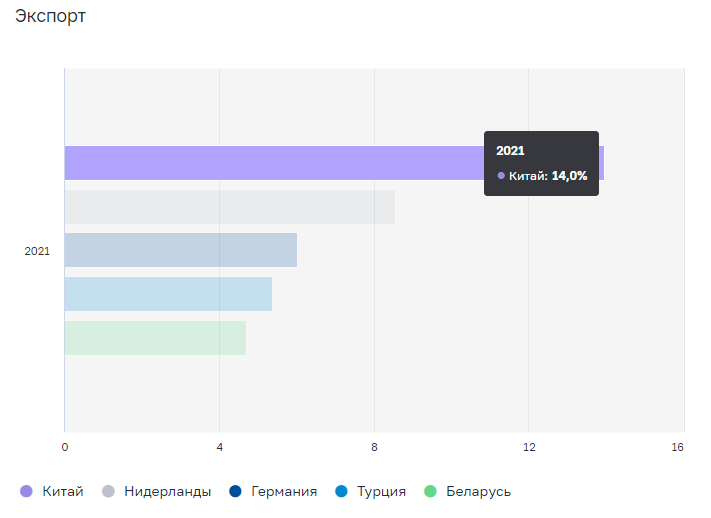 As for imports, it is also dominated by China. From there they imported almost a quarter of all goods that came to Russia – 24.8%. In second place – Germany (9.3%), then – USA (5.7%), Belarus (5.3%) and South Korea (4.4%). But it is important to understand one nuance: if fossil fuels go to Germany, the Netherlands and Turkey, then in the opposite direction from USA, Korea and European Union – high-tech products. 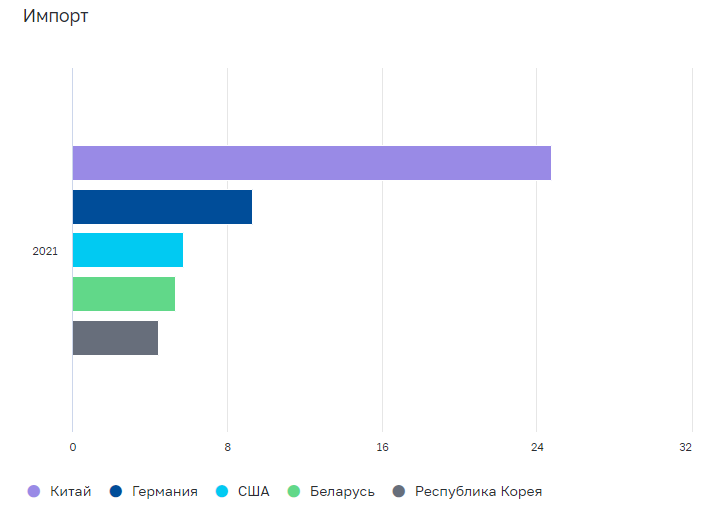 These are machines, machine tools, equipment, electronics. Of course, you can live without them (however, there was a man for thousands of years!). But the quality of life will drop a lot, gray imports will appear, black markets – all the delights of a closed economy. We went through this in the USSR, and right now Iran and North Korea are learning the same lessons..

Summary. If you look into the abyss for a long time …

So, the international economy is a system of communicating vessels, and Russia is firmly integrated into them. Most of all, the countries of the former USSR depend on us, and not only Belarus and Armenia, but also Lithuania and Estonia. The calculation of the European Union and the United States that one-sided sanctions can quickly collapse the Russian economy is doubtful. Together with the Russian Federation, Belarus, Armenia, Kyrgyzstan will collapse, the Baltic States will stagger.

Only Germany supplies more to Russia than it receives in return. Key partners (China, Belarus, Turkey) did not join the sanctions – it is easy to see why. Now we are entering a long international sparring, where there may not be winners. Economies are too strongly connected with each other.

Russia will take part in the 75th World Health

struggle for freedom and the future of all mankind

“Reliable friend and partner”: trade between Russia and Thailand