In December, the regulator will present a prototype of the platform, and in the first quarter of 2022 it will start testing it.

The First Deputy Chairman of the Bank of Russia Olga Skorobogatova and Deputy Chairman of the Central Bank Alexei Zabotkin today presented the concept of the digital ruble. A document published on the regulator’s website says that a two-tier retail model has been selected as the target model. The prototype of the digital ruble platform is planned to be presented in December 2021.

In October last year, the Bank of Russia published a consultation report on the launch of the digital ruble. An analysis of the feedback received during the public discussion of the report showed that the overwhelming majority of respondents (84%) preferred the central bank’s retail two-tier digital currency (CBDC) model. The regulator also decided that this model is the most appropriate for further implementation.

Diagram of the two-tier retail model of the digital ruble

The two-tier retail model assumes that the Bank of Russia will be the issuer of the digital ruble and the operator of its platform. At the same time, financial institutions act as intermediaries – they open wallets for clients in CBDC and conduct transactions on the digital ruble platform. Digital rubles will be available to citizens and businesses through any bank in which they are served.

To replenish its wallet, the bank will have to send a request to the Central Bank to issue digital rubles. At the same time, the regulator will write off non-cash funds from the correspondent account of the credit institution and issue digital currency in an equivalent volume.

The transfer of digital rubles between individuals from among individuals will not differ from the exchange of non-cash funds – it will also be carried out through banking applications. For online payment in digital rubles, they plan to use a QR code or other identifiers with subsequent confirmation of the payment in the wallet of its initiator.

The concept of the digital ruble also implies the possibility of offline transfers and payments, which are carried out without access to the Internet. For this, special digital wallets on mobile devices will be used. The Central Bank still needs to work out the method of implementing this opportunity. 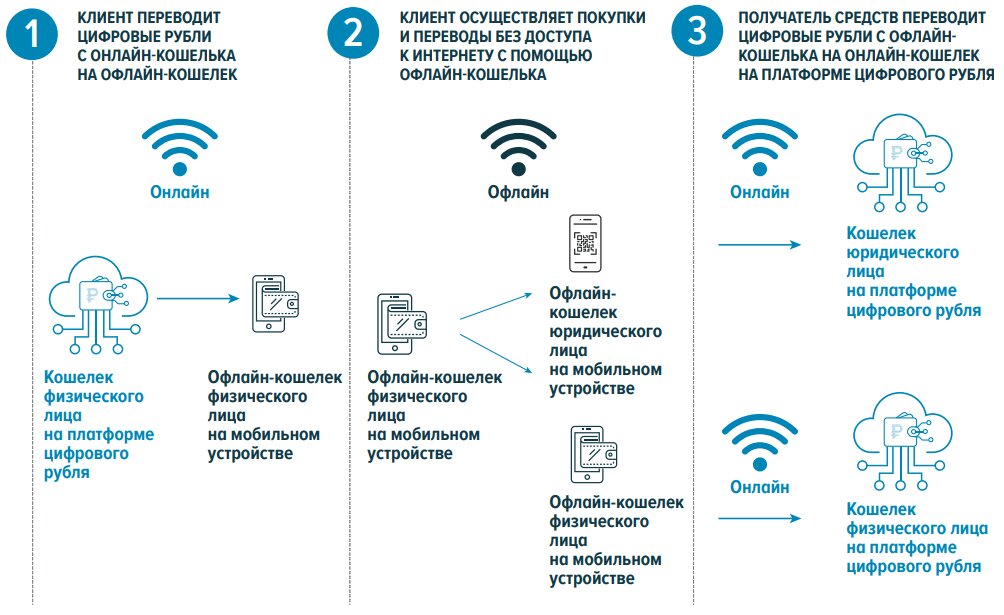 The digital ruble platform will have additional functionality in the form of smart contracts. The regulator believes that their use will optimize business processes associated with interaction between counterparties, as well as minimize the time and costs of transactions.

Read also: The Central Bank does not plan to use the digital ruble for accepting deposits and issuing loans

Skorobogatova said that at the initial stage, the Bank of Russia will launch and test operations with the digital ruble with credit institutions for the simplest payments and transfers, such as transfers between individuals. At the next stage, the regulator will move on to testing more complex operations, for example, transfers in digital rubles to pay taxes.

Skorobogatova emphasized that transfers in digital rubles between individuals will be free, and a commission will be charged for paying for goods or services with this form of money, not exceeding the one in the Fast Payments System (FPS). In the SBP, the commission is now 0.4-0.7%.

In December 2021, the Bank of Russia will present a prototype of the digital ruble platform, and in January next year it will start developing draft amendments to the legislation of the Russian Federation. Testing of the platform prototype will begin in the first quarter of 2022.