Bitcoin price recently hit a new all-time high of around $ 42,000, more than double the previous peak in 2017. However, the cryptocurrency has not attracted as much hype among retail investors as it would have been in line with current activity.

Since 2019, the “hype to activity” metric developed by the TIE portal, which reflects the ratio of the number of tweets with a mention of cryptocurrency to the volume of trading on the market, has been kept at approximately the same level.

“The hype to activity metric measures the number of tweets for every $ 1 million in the reported trading volume of a particular coin,” Joshua Frank, CEO of The TIE, told Cointelegraph.

Interest in Bitcoin for this indicator significantly exceeded its price in relative terms for most of 2018. By May 2019, the indicator dropped to 1.02 and stabilized, being below the rate chart. Even with a new Bitcoin price high on January 8, 2021, it only climbed to 1.24, slightly above industry averages.

At the same time, attention to Bitcoin from the mainstream media has been growing rapidly since October 2020, reflecting the trajectory of the course as in 2017. 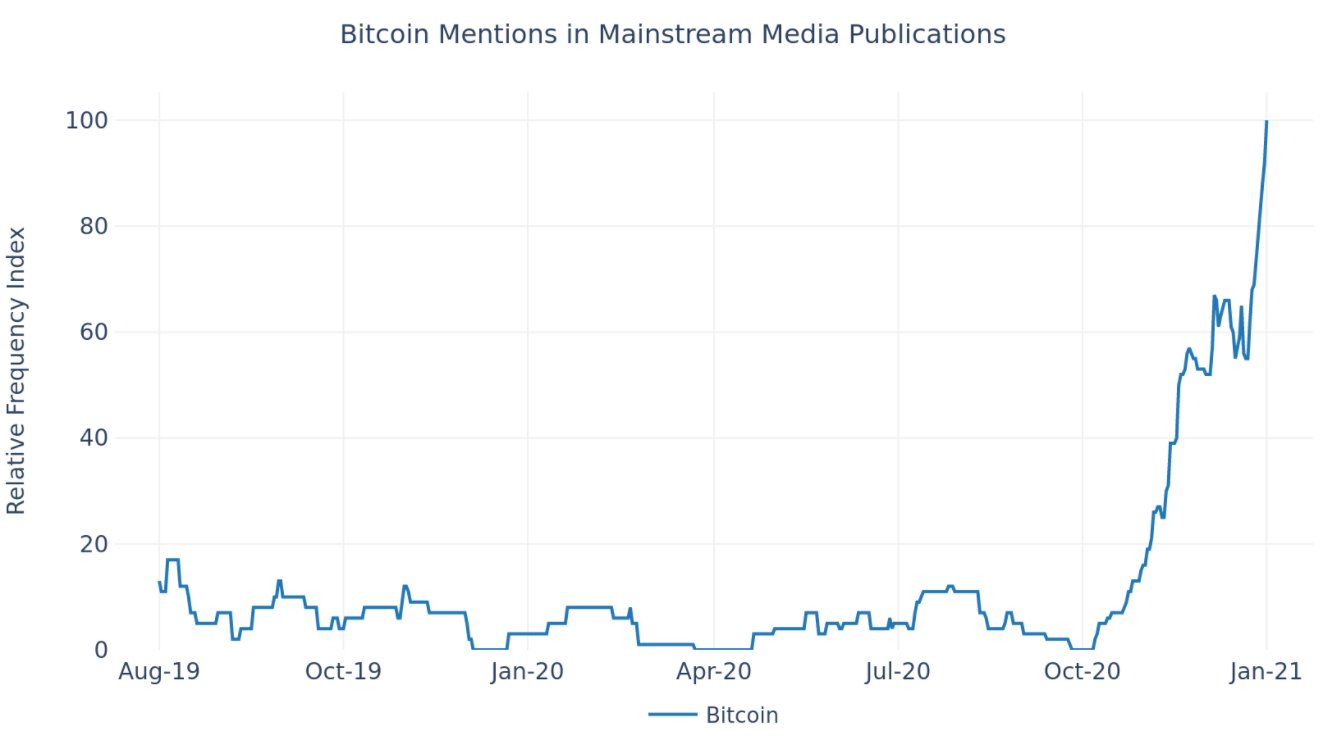 A number of major entities such as MicroStrategy and Square began reporting Bitcoin purchases in 2020, which was reflected in their respective metrics. “Obviously, the Bitcoin rally was driven by institutional investors,” Frank said. – When Bitcoin surpassed $ 20,000 in December, the 30-day average volume of tweets mentioning Bitcoin was only half of the 2017/2018 highs. The low activity in Twitter discussions suggests that a small number of large investors were buying initially, rather than a large number of small investors. “

The latest data, however, indicate an increase in interest among retail investors. The record levels of mentions of Bitcoin on Twitter coincided with its current correction.

“Generally speaking, we found that extremely high sentiment coupled with unusually high Twitter activity tend to be a negative signal for the price of bitcoin in the short to medium term. Long-term sentiment for bitcoin (a metric reflecting how positive the discussions have been over the past 50 days versus 200) are near historic highs, ”added Frank.