There are more than enough petty scammers on the net today, we want to talk about one of them. This is the RuZaim company, which acts as an intermediary between those who are looking for where to get a loan and those who are ready to provide loans. That is, we are talking about a service for the selection of loans. There are many such services, and they all charge for their services, but our hero does not just take a fee, but literally robs his customers without fulfilling the promise. How this happens, we will describe in the article, but first, let’s look at the project website.

Contents
1 What is the site ruzaim su?
2 Checking Project Data
3 Exposing a scam
4 Company reviews
5 What to do?

What is the site ruzaim su?

Before us is a typical website of a company that provides intermediary services. He looks quite presentable, in any case, is able to make a positive impression. The main page flaunts a loan calculator, which is an integral attribute of all resources that provide loans directly or select loans. But in the case of our hero, the loan calculator functions as a lure, it shows how profitable it is to take loans from RuZaim, but in fact it simply lures victims, whom the creators of the scam will then rob. How, we will tell further, and now we suggest paying attention to the fact that the site is literally crammed with the buttons “Get money” and “Submit application”. This is what scammers do, whose task is to lure the next victim in the network as quickly as possible. In order to attract customers, the crooks who released the RuZaim scam online filled the site of their offspring with descriptions of the benefits of working with him. First of all, the advantages of a paid subscription are signed:

The list of advantages may seem quite worthy, if you do not take into account the fact that we are dealing with the usual thieves’ sharaga, whose website is used solely to attract victims. If you check the information that is presented on it, it immediately becomes clear that RuZaim is an ordinary scam, which, by the way, works through two sites at once: ruzaim.su and ruzaim ru. These are exactly the same resources created by one gang of scammers.

READ ALSO: Fraud with the issuance of Visa and MasterCard cards to Russians

The loan selection service is the property of the individual entrepreneur Osaulenko Artur Alexandrovich, OGRNIP 320222500043193, TIN 228602140022. We found the company’s card on the net, and there is no mention that it has the right to provide intermediary services related to finance. Its main activity is data processing and the provision of services related to the placement of information. The scammers deliberately did not indicate what kind of real activity their offspring would be engaged in, because then it would be necessary to acquire licenses, and the RuZaim project could not receive it under any circumstances. Why? Because in order to obtain a permit for activity, you need to have a residence permit, but our hero does not have it.

The site, of course, indicates the registration address: 656031, Russia, Altai Territory, Barnaul, st. Molodyozhnaya, d 136, kv 168, there is a small business center, but RuZaim was not found in the list of companies renting premises there. By the way, since the project declares a Russian residence permit and is aimed at serving Russian citizens, it is supposed to have a license from the Central Bank of the Russian Federation, but the scammers decided not to bother getting it. That is, the company operates illegally, which makes it potentially dangerous. The crooks, of course, tell tales that their offspring provides services based on the Federal Law “On Consumer Credit (Loan)”, but this has nothing to do with the truth. 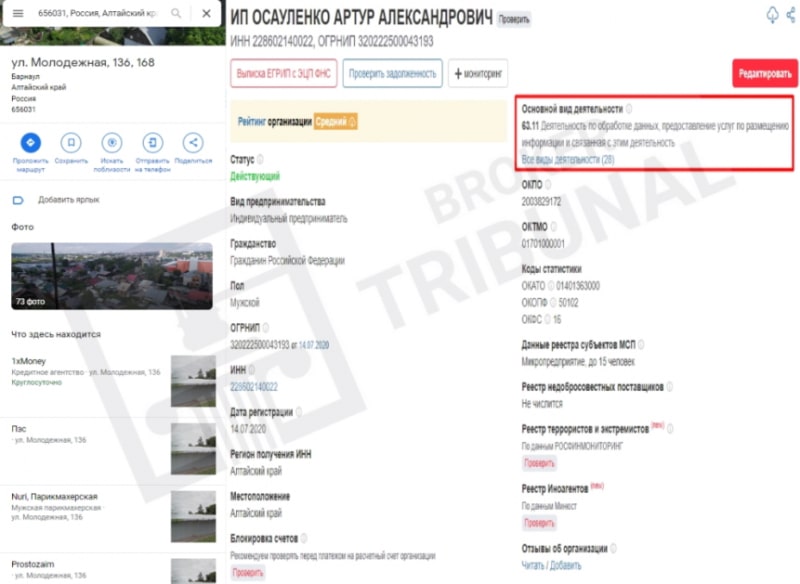 Scammers offer their clients a selection of profitable loans, even if they have a damaged credit reputation and lack of work. This should already be alarming, because even the most loyal microcredit organizations pay attention to whether a potential borrower has a source of income and check whether he is a malicious defaulter of loans. But our hero is not going to bring borrowers to creditors, he is exclusively engaged in collecting money for his services. We will return to this later, but now we note that RuZaim does not and cannot have a list of MFIs cooperating with it, and the favorable conditions for providing loans described on the site serve as bait, nothing more.

So, back to the paid subscription. The cost of the company’s services is 500 rubles, and this is, in principle, inexpensive. But not everyone pays attention to the fact that the fee is charged every five days until the victim cancels the subscription. But this can be problematic! Unsubscribing from RuZaim paid subscriptions is not so easy. Yes, the site has a step-by-step algorithm, following which users can allegedly unsubscribe from RuZaim paid services, but judging by what ex-customers of the service write, this is impossible to do in reality. The crooks deliberately blocked this function in order to rob those who turned to them for help as much as they want, especially since the amount of a one-time withdrawal is not so large, and not everyone notices its disappearance from their account.

Fraudsters charge a fee for picking up loans, but it doesn’t even get to the picking itself. At the same time, the site says that the purchase of a subscription does not guarantee a loan. That is, if customers start complaining that they did not receive the service they paid for, scammers can poke them into this phrase and relieve themselves of all responsibility. As the reason for clients not receiving loans, swindlers cite bad credit history, lack of a permanent job, problems with documents, and so on. This is written in the public offer, and we recommend that you read it carefully before deciding to cooperate with our hero.

READ ALSO: Baksu.ru – divorce with the selection of loans and payment for the first loan

Clients describe the fraudulent scheme of the scam in their reviews, which we found on the network. There are not very many of them, perhaps the scammers remove the negative towards their offspring in order to prolong its life, but even a couple of complaints about ruzaim su in the reviews of robbed victims are enough to see that we are dealing with an ordinary thieves sharaga. Former clients write that it is generally impossible to unsubscribe from RuZaim, even after fulfilling all the requirements, the service still continues to charge.

If you have registered on the ruzaim su website, you will not be able to unsubscribe from it just like that, and even more so if you have indicated your details for withdrawing the fee for the selection of loans. The only way to prevent scammers from robbing you by debiting 500 rubles every five days is to urgently transfer money from the specified card to another and block it. Given the thieving nature of the project, we do not recommend registering on its platform at all, and even more so, indicating your contact details, because crooks will not stand on ceremony, they will call and write to you to cheat on a paid subscription, and then, without a twinge of conscience, they will begin to rob .

The Russian stock market has moved to a steady decline

System of electronic passports of vehicles: a guide for

Up to 75 years: banks have relaxed age requirements

Banks sell exotic currencies – from the yuan and