Today there are many wallets for storing cryptocurrencies, but only one maintains a loyalty program and rewards its customers for using it. Meet the Bread wallet with almost 1 million customers from over 160 countries.

What is Bread? Why is a native BRD token needed? Should you use the Bread wallet at all? We’ll figure out.

What is Bread Wallet?

Bread is a multi-currency hot wallet for storing bitcoin and altcoins, available on iOS or Android operating systems. The wallet was developed back in 2015 by two developers Aaron Voisin and Adam Trademan, originally from Switzerland.

Bread does not require client verification. Users just need to install the application, create a new wallet in two clicks, write down a 12-word seed phrase and start using it.

Bread supports Bitcoin, Ethereum, Bitcoin Cash, DAI stablecoin and ERC-20 tokens. Unlike other wallets, Bread users can independently set the size of transaction fees, even on the bitcoin network.

Many crypto market participants call Bread a kind of blockchain bank, since the wallet developers do not have access to clients’ assets. Bread collaborates with various representatives of the crypto industry and financial companies to ensure that users can buy and sell cryptocurrencies and even pay salaries. Bread is one of the few who seeks to reduce people’s dependence on traditional fiat banks and promote immersion in the world of blockchain banking.

Moreover, Bread operates in almost every country. Developers simply enter into partnership agreements with regulators and banks in different countries. Here’s what the Bread team writes on their website:

If you create a China Bread wallet, you will be given access to Japanese trading platforms that are compliant with the country’s regulator. If you come to France and run Bread there, you will see the features available for use in that country.

In December 2017, Bread management issued a native token under the BRD ticker. With it, you can get a discount on transaction fees. For example, if you send $ 100 to ETH, you will be charged $ 4 in commission, and when using BRD, the commission will be only $ 2.

The total emission of the token is 88,862,718 BRD, of which a third was distributed through presale and token sales. In total, $ 32 million was raised.

BRD tokens do not have to be bought on crypto-exchanges, it can be earned by posting on social networks, participating in various polls, etc. More detailed information can be found on the official website.

The question is asked: is it worth investing in Bread tokens at all? The thing is that BRD depends on its usefulness and the popularity of the wallet. It can be purchased only if you carry out transactions on the Bitcoin and Ethereum network at least once a week. Otherwise, BRD is not an investment attractive asset. 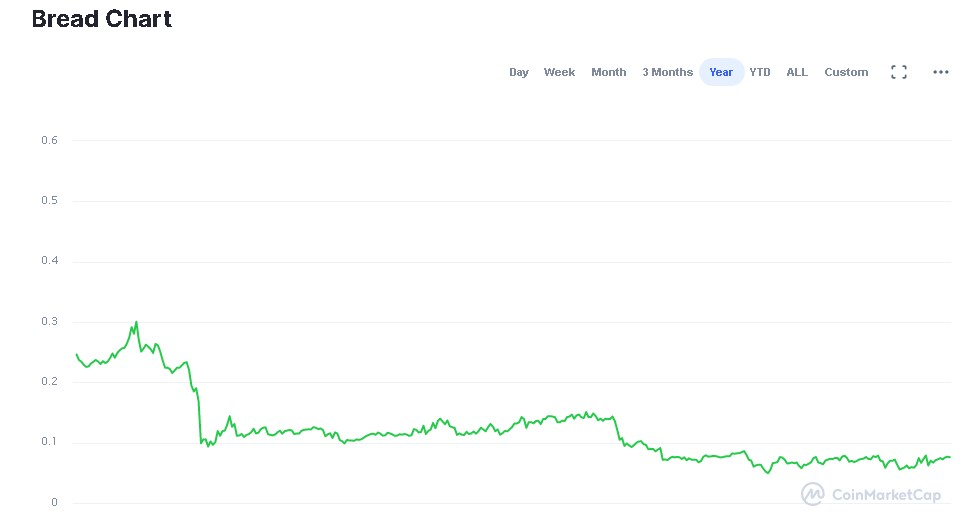 Where to buy BRD? Tokens can be bought both on the mobile app and on the Binance exchange. By the way, it generates 50% of the BRD trading volume.

Bread is a beautiful, secure and easy-to-use wallet. We used it to store Ethereum, so we can recommend it to you. It is better to purchase some BRD tokens for making payments. Trust me, they come in handy for paying commissions. Moreover, this solution really works and allows you to significantly save on payments.